Tons of music classrooms utilize a program called Recorder Karate.  This collection of songs and teaching materials are available through Music K-8, but many teachers also create their own versions to fit their classroom needs.  I have done the latter, creating my own version of Recorder Karate to use in my classroom. No matter what songs you choose to use for Recorder Karate, or any recorder program, you can incorporate more technology into your teaching and the student’s learning.

Belts on the iPads:

My first year using Recorder Karate, I found that I was “wasting” a lot of class time 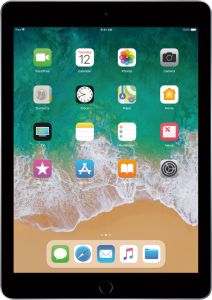 having students play for their belts during class.  Students would sign up when they walked into class if they wanted to test that day, and then after our opening activity we would do belt tests.  Students would play their song in front of the class for their belt. Quickly I realized this wasn’t working for me or the students. Students were feeling stressed and embarrassed to play in front of the whole class.  I was using all of my class time almost every other day for playing tests.

Then I got some iPads for my classroom.  Students still were able to sign up to do belt tests when they walked into music.  We began our opening activity and then continued on with various other lessons throughout the music class.  After our opening activity I would hand an iPad to the first 2 people on the list. They walked into the hall right outside of my room and would record each other playing.  After they recorded the students came back in and would quietly find the next 2 people on the list and give them the iPad. This allowed students to do their belt tests, but also allowed me to have limited interruptions in my lesson plans.  Students also felt less stressed only having to play in front of one classmate.

Later during my plan, or after school I would listen to the beautiful sound of recorder songs and decide if the students had passed their belts or not.  The next music class, I go through who received their belts and then also talk to the students who need to work on something specific for the next time. This process was a good compromise at the time, but now that I have google classroom I utilize Classroom rather than iPads.

My school uses Google Classroom for our older students.  They each have a chromebook they can use during school hours which makes this process very accessible to all my students.  With Recorder Karate, I post different “assignments” on Classroom for each of the belts. For each assignment I upload 3 things: a copy of the sheet music, directions for posting their videos to the assignment, and videos of myself teaching and reviewing the different songs.  Students can watch the video to review or learn a new song (if they are ahead of the in-class pace). I go step by step through my songs to show them different notes on the staff, fingerings, and how the song should go. They can view the sheet music to play along, and I also give out hard copies at school as well.  * I create my videos using Adobe Spark* Here is an example:

When the students feel comfortable enough to “test for their belt”, they create a video of 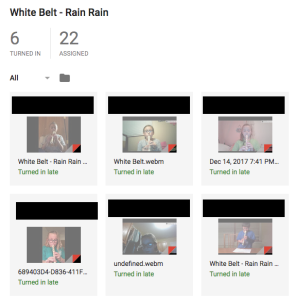 This process is a lot of prep work for me on the front end; making the videos, uploading the assignments, creating copies of the songs; but it allows the students more access to the materials at their own pace.  I have even had students zip through all 9 belts in under a month because they were so motivated.

I have now moved away from using only Recorder Karate in my classroom.  I have attended numerous workshops, conferences, Orff levels, and much more so I have a ton of resources to choose from.  I still use Recorder Karate via Google Classroom, but it is now just as Extra Credit for my students. Every teacher has their own take on how and when to teach recorder, and I hope this might help to improve or give you new ideas about how to incorporate some technology into your recorder teaching. 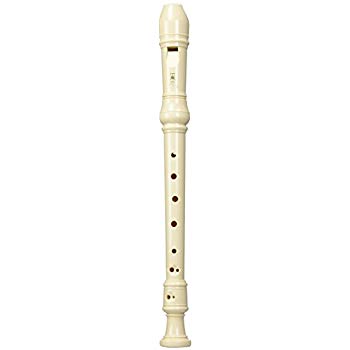 View all posts by Allison Croskey