This year my 3rd grade concert was entitled “You’ve Got Mail”. We did 6 different songs all about things you get in the mail. I wanted to share with you some of the songs we did and my process for getting us there.  This post contains the first 3 songs “Writing a Letter”, “Postcards”, and “Bills Bills Bills”.  Check out part 2 for the rest of the concert.

Writing a Letter
The melody and lyrics for this song were written by me, and are available along with the plans and powerpoint for FREE,  Writing a Letter! Check out the video at the end of the post to see my students performing this song at the concert!

We started by exploring different ways to move to a 2 meter and a 3 meter. Then I had them focus on their 3 meter movement, since that is what this song is in.
The next class we learned the word and melody to the song via the powerpoint slides. Then i divided the class in half and had half do the 3 meter movement patterns, and the other half sing the song. Switch and repeat.

We continued to use the powerpoint to read the rhythms of the verses to the song, then added the lyrics. I also had them transfer the words to body percussion for some added spice. You can even transfer that to un-pitched percussion instruments if you would like.

The postcards song was written entirely by my students. 1 class performed movement sequences based on various postcards and another class composed and played ostinatos. 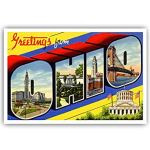 We began as a whole class looking at a postcard picture and finding the straight, curvy and zig zag pathways in the picture. Students improvised various movements to match those pathways to a steady beat. Then I chose one for the whole class to do. We repeated this process until we had all 3 types of pathways. Then we put them together into a form, usually ABCA, but you could pick a different pattern. The whole class performed the piece to my steady beat. Then the next class, students split into smaller groups and repeated the same process with their own postcard pictures.

I set up the instruments in the desired pentatonic to start. Then I allowed the students a few minutes to experiment and see if they could come up with their own 4 beat melody pattern that could be played over and over. Each student had a chance to try their pattern. This was also helpful to me to see what they each sounded like and I could begin to see if any of them fit well together. We picked a couple out and had the whole class try and play them. From there is was up to my kids on how they wanted to have the ostinatos play. They chose to have the ostinatos take turns play. This was helpful to the movers as well so they could know when to move onto the next section. We added some steady beat playing in the bass and went from there. It was a lot of student creation, so it depends on your classes how it might sound.

The melody for this song comes from Erstes Spiel (page 12, #27), but I wrote the lyrics:

Again we started with a 2 verses 3 meter warm up. When we settled on the 3 meter I had the students partner up and find a way to show the meter with their partners. They had to have a “strong” beat and 2 of the same “weak” beats. They moved while I sang the song. Then I taught them the lyrics by rote.

After learning the song, each group took a turn showing off their 3 meter movement.  The entire class would sing the song while each group would do their movement.  As a class we picked 1 whole groups movement (or parts of a couple groups) to perform all together.  This would become the movement for the “All of these bills” part of the song.  Then the class brainstormed on what to do movement wise for the other parts.  We shared ideas and came up with a simple dance for them to do.

During the next class students worked on writing their own “bills”.  We were doing songs and rhythms in 3/4 meter so I decided to have them compose small rhythm sentences in 3/4 meter as well.  We did a set of rhythms as a whole class then they grouped up in groups of 3-4.  When writing the rhythms we chose a pattern for the set (ABAB, ABCA, ABBA, etc.).  This is the pattern we would use for the whole class and for the small group compositions.  Students wrote their rhythms in the first measure (A) and then continued on from there.  If there was another section with the same letter they would write the same rhythm.  We then transferred these rhythms to various body percussion.

It was difficult at first because my students did not have a lot of experience performing rhythms in 3/4 meters so they kept putting rests at the ends of the measures.  Thankfully with practice most of the groups were able to perform the rhythms correctly in 3/4 meter.

Here is a copy of the “Bills” sheet I used for them to write their rhythms on:

Here is a video of my students at the concert performing the “Writing a Letter” piece:

Check out my other posts about this concert:

If you have any questions about these processes, songs, or lessons just let me know!

View all posts by Allison Croskey